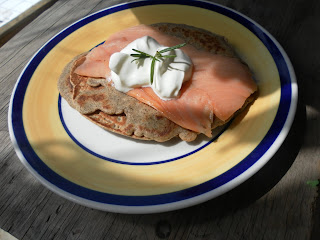 Hi Pancake Zen readers! My name is Julia and I am a guest contributor to pancakezen.com. My first entry is about blini (plural). Blini are traditional Russian pancakes made with buckwheat and should be thin enough to see through. They can be topped with any number of ingredients including salmon and sour cream or, for the well-heeled, creme fraiche and caviar, paired with champagne. I tend to substitute sometimes when I cook, with varying results. I tried to follow instructions for this blini recipe, courtesy of Ina Garten, only substituting the all-purpose flour with whole-wheat flour, and skipping the salt (which my boyfriend thinks is just plain evil), and using 2 large eggs instead of one extra-large. I had to add a bit of water to compensate for the extra egg. Several other recipes instructed that the milk be heated, so I microwaved for 40 seconds.

I didn't get the memo on blini being tiny (I was looking at the recipe on my iPhone and didn't grasp the sense of scale), so ours were 3x the size of a standard blin. I was also wondering why the recipe suggested pouring batter into the pan with a tablespoon...

My boyfriend Josh and I enjoyed ours (pictured) with smoked salmon, creme fraiche, and fresh rosemary (though dill is more traditional). Josh's roommate Daniel went the pancake route and topped his with maple syrup. Traditional sweet toppings for blini include jam and honey. Cheers!
Posted by Savor the Flavor at 5:27 PM